Rescued from the Reich: How One of Hitler's Soldiers Saved the Lubavitcher Rebbe


Extremism in the pursuit of God is no virtue

A sect of religious extremists have erected a deafening air raid siren atop of:


§24-217 Exemptions. The provisions of this code shall not apply to the operation or use of any organ, bell, chimes or other similar instrument [by] from on or within any church, synagogue, mosque or [school] other house of worship.

The New York City Health Department has also failed to protect the residents from the heath hazards this siren causes.
Each time the siren is sounded, it blasts for about a minute. The siren is so loud that the sirens of emergency first responders (police, firemen and ambulances) crossing intersections against the light cannot be heard by the other motorist or pedestrians. This danger persists for several blocks away from the yeshiva.
These auditory terrorists do not wear turbans. They wear Black Hats. They do not care that they are injuring the health of their neighbors or putting the lives of the policemen, firemen and EMTs in danger.
The New York City Noise Code should be religion-neutral. Freedom of religion is not an absolute freedom. Roman Catholic priest who molest children are not exempt from prosecution. Mormons who marry more than one wife at a time are not exempt from bigamy prosecution and the matrimony laws. Islamic Fascists who build and store bombs in Mosques cannot claim the protection of the First Amendment. Female circumcision is banned in New York. Rastafarians who smoke Marijuana are not immune from the drug laws.
Why should religious institutions be exempt from the Noise Code?
Since the City of New York has failed or refused to protect us, we must resort to a civil lawsuit. The yeshiva building and land it sits on is worth several millions of dollars. It could easily be turned into luxury condos. We will provide free advertising space to any law firm willing to pursue a class action lawsuit against these auditory terrorists.
When they blasted their sirens in Williamsburg, I did nothing. When they blasted their sirens in Boro Park I did nothing. Now they are in Midwood. Help us before they come to your community. Maybe when they blast their sirens next to Mayor Bloomberg's mansion on the Upper East Side something will be done.
Unfortunately our local politicians are too busy ki$$ing the Yeshiva's Mezuzah to be concerned with the health of their constituents.
Section 24-217 must be removed from the New York City Noise Code.
We must keep calling 311 to file complaints.

What can you do?
Visit Stop the Noise

It is ironic that observant Jews walking to their synagogues to pray are most affected by the deafening siren. Not only do they have to endure the pain of siren, they also have to face the dangers of crossing streets first responders may be racing though, unable to hear their warning sirens.
Many observant Jews have had to be late for services or stopped going. When these observant Jews have complained to the head Rabbi of Yeshiva Toras Emes Kamenitz, their complaints have fallen on deaf ears.
Yeshiva Toras Emes Kamenitz is guilty of a hate-crime since they are preventing observant Jews from practicing their religion freely.
Call Brooklyn District Attorney Charles J. Hynes to file a hate-crime complaint.

A suit filed on December 12, 2006 in Brooklyn Supreme Court accuses Avraham Mordecai Lazerewitz, a supervisor at:


of groping and improperly touching a student in April.

It has been reported that Rabbi Abraham Leizerowitz has been on "vacation" in Israel. He won't be coming back to Brooklyn until District Attorney Charles J. Hynes "invites" him to return.

Is this what they are teaching in the Yeshivas?

from blasting their deafening Shabbos Air-raid Siren (measured at over 100 decibels), The DEP lost the case because religious institutions are exempt from the New York City Noise Code.

After creating an atmosphere in which the Ultra-Orthodox are immune from prosecution, it should be no surprise that a gang of Yeshiva students felt that they were above the law when they attacked Shahid Amber because he is a Pakistani (Muslim) immigrant. Although District Attorney Charles J. Hynes will be prosecuting this case, he has shown a lack of desire to prosecute the Ultra-Orthodox. The U.S. Justice Department should monitor his performance and consider filing Civil Rights Violation charges against these Yeshiva students.

It is time that Mayor Bloomberg remove the handcuffs from all of the City agencies, allow them to enforce the law and remove all religious exemptions from the law. The Yeshivas these students attended should be investigated. They should loose their tax-exempt status if their teaching contributed to the attack.

Why is it that the name of the Yeshiva these students attend has been kept secret?
If a gang of Muslim high school students attacked a Yeshiva student, the pictures of the Mosque they attended and the Imam of that Mosque would have been on the front page of every newspaper.

These Yeshiva students are above the law. They will either get a slap on the wrist or their parents will send them to Israel. Once they are in Israel they will be exempt from military service because they are Ultra-Orthodox.
The bail that these Yeshiva students are free on is so low, it is a joke. District Attorney Charles J. Hynes has shown a suspicious reluctance in extraditing the Ultra-Orthodox from Israel.

Are the Yeshivas teaching that Baruch Goldstein was a hero?

Is your child safe in a Yeshiva?

No Sex Charge For Kolko; Boys Parents Foiled By DA The Jewish Week

Rabbi Kolko has pleaded guilty to two counts of endangering the welfare of a child.
Plea Deal:
Rabbi Yehuda Kolko will have to undergo counseling and 3 years probation.
No Jail Time
Is any Yeshiva student safe?
Not as long as Charles J. Hynes is District Attorney.

Rabbi Yehuda Kolko is accused him of molesting two male students - there may be at least 15 victims. School officials from Yeshiva Torah Temimah waged a campaign of intimidation and concealment against the victims and their families to bury the accusations against the rabbi.

Will District Attorney Charles J. Hynes do his job or will he drop the ball again?

The Orthodox Jews and their Catholic-Priest Problem New York Magazine

Mayor Bloomberg and the New York City Department of Health

Before the Mayoral Election (11/8/05), Mayor Bloomberg met with a group of ultra-Orthodox rabbis. At the meeting Mayor Bloomberg agreed to have Health Department drop a lawsuit against rabbis who practiced metzizah bi peh. The lawsuit sought to protect babies from the deadly herpes virus. The Mayor then gave a rabbinical court from the Central Rabbinical Congress the authority investigate the matter.

The Mayor violated his oath of office and the U.S. Constitution. The last time a state gave a religious court authority over its citizens was during the Spanish Inquisition. Jews should be the first to protest this act since Jews have been the first to suffer when religious courts are given power by the state.

Two new cases of rabbi induced herpes infection have occurred. The rabbinical court has failed to take any action.

One must ask the question, "If the parents were black or brown, what would the City have done?"
The answer: The parents and the "exorcist" would have been arrested. Other children in the home would have been removed and placed in the foster care system. The parents identity would have been plastered all over the newspapers. Instead of enforcing the child protection laws, Health Commissioner Thomas Frieden released a letter to educate Jewish families about inherent risks of metzizah bi peh.

Too little! Too late!

It is time for the Mayor to be held accountable for the failure of his administration to protect Jewish babies from herpes infecting child molesters.

Why isn't Yitzchok Fischer in jail?


Question:
If an Iranian-American Muslim ( a devout follower of Ayatollah Khomeine ) killed Salman Rushdie while he was visiting New York, would he be arrested for murder? The killer could claim he was exercising his First Amendment right of freedom of religion. Would he be indicted? That would depend on how many Muslims lived in the District Attorney's election district.

Cut It Off - Another disgusting religious practice Christopher Hitchens

Rabbi Judah Feinerman has confessed to stealing over twenty million dollars.
The real Shandeh is that over one hundred so-called "Jewish leaders" have written to the judge asking that this 79 year old thief not be given any jail time. Real Jewish leaders would have asked the judge to give Judah Feinerman a severe sentence. How many of these so-called "Jewish leaders" enclosed checks to return the stolen money they received from this "Robin Hoodstein"? Among those requesting leniency, is the head of Touro College (see below). The Gefilte Fish Rots from the Head Down. We demand that there be an investigation to determine who received stolen funds from Judah Feinerman. These stolen funds should be returned to the victims of this insurance scam. Those who fail to return the stolen funds should be prosecuted.

Thou Shalt Not Steal 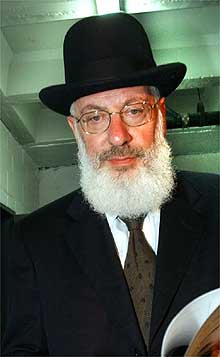 David N. Kelley, United States Attorney - Southern District of New York has sent a message to all thieves. "It's OK to steal from the government as long as you give or raise money for the Republican Party"


Milton Balkany stole $700,000 of a federal grant. He only has to pay back $400,000 of the money this year and a $300,000 lien has been placed against his school for the rest. The mortgage on his yeshiva is in default. No trial, no fines, no jail.
Punishment: He may not ask the government for any more money.
David N. Kelley is so embarrassed by this deal, he has not posted this plea on his website.

Ask the Inspector General of the U. S. Department of Justice to investigate this case.


U. S. Department of Justice Office of the Inspector General

Rabbi Riddle: Thou Shalt Not Steal!

Touro College is the bagman for the Ultra Orthodox "Jews".
Touro College is a blight on academia and a Shandeh to all honest Jews.
Politicians who do the bidding of the Ultra Orthodox know that they have a safety net.
When they retire or are forced to retire (by the voters or threat of indictment), there is a job waiting for them at Touro College.
Former Senator Robert G. Torricelli works for Touro College.
Soon to be former Gov. James E. McGreevey will have one also.
Charles Kushner, who has been charged with obstructing a separate federal investigation, is a Touro board member.
Kushner is also charged with conspiracy, obstruction of a federal investigation and interstate promotion of prostitution.
Charles Kushner pleaded guilty to lying about political donations, cheating on taxes and videotaping a government witness having sex with a call girl.
The Gefilte Fish Rots from the Head Down.
Touro College is a threat to our democracy because they corrupt the political process.
Ask the New York State Attorney General to investigate this "college".
Eliot Spitzer, do you have a job waiting for you at Touro College?

"No one is above the law" - Mayor Michael Bloomberg

Five Are Burned in Pre-Passover Fire Ritual in Brooklyn


Satmar Hasidim Held Family Against Their Will

Boro Park Two are being reindoctrinated by Orthodox group       M.A.S.K.

Rabbi makes deal with the Devil

Who Killed Jesus of Nazareth